Michael Dickey, Camille and Henry Dreyfus Professor & University Faculty Scholar, has been identified as one of the most influential researchers in the world.

Clarivate, a Philadelphia-based company tracking analytics in the areas of scientific and academic research, announced the rare distinction on November 16. According to the firm, Dickey is one of only 6,700 world researchers (0.1%) in 21 research fields and across multiple other fields to earn this honor. Dickey has produced multiple high-cited papers that rank in the top 1% by citations for field and year in Clarivate’s Web of Science™ database of academic articles.

Dickey said, “Recognition of our research at NC State reflects how incredibly fortunate I am to work with talented students, post-docs, and collaborators.”

Clarivate’s distinction is just one of several recent achievements for Dickey. Earlier this year, he received the 37th R.J. Reynolds Tobacco Company Award for Excellence in Teaching, Research and Extension. He presented a lecture as part of his award on  Thursday, November 11 titled Beyond the Terminator: Liquid Metals, Stretchable Electronics and Shape-Changing Materials. In 2020, Professor Dickey was included in a compilation assembled by a team of researchers at Stanford University of the names of the world’s top 2% of the most-cited scientists in various disciplines. He is the author or co-author of more than 200 research publications with over 17,000 citations and he’s the author or co-author of 7 book chapters. 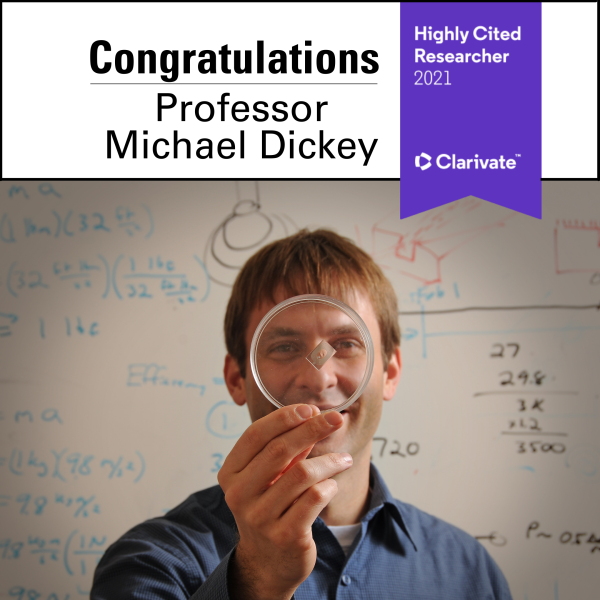