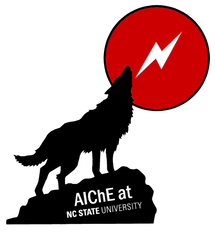 Our AIChE student chapter members have a long history of attendance and participation at AIChE national meetings. Following last year’s pandemic-driven hiatus, chapter members made their presence known at the in-person 2021 AIChE National Meeting in Boston.

Their activities and accomplishments include:

Andrew Berley won a Donald F. Othmer Sophomore Academic Excellence Award. He finished his sophomore year with the highest GPA in his class.

Zac Gill received a Freshman Recognition Award. The award recognizes a freshman year student who has been an active Chapter member.

Launched in 2020 by the RAPID Manufacturing Institute®, ChemE Cube is an annual student competition where undergraduate university teams design, build, and demonstrate a 1 cubic foot plant that produces a chemical product defined in the annual problem statement (which changes each year). Teams compete based on cube performance via a head-to-head duel and promote their technology through a 3-minute ad, a poster, and a 20-minute ‘shark tank’ style pitch to a panel of mock investors.

This year, to pilot the ChemE Cube program, six university teams were tasked with creating a modular, on-demand surface water treatment mini-plant that can purify at least 25 liters of surface water per day while meeting relevant drinking water standards. Crucially, the cubes had to be able to be built and deployed as part of a humanitarian effort or built using artisanal factories as part of an enterprise solution to poverty.

Financial and logistical support for travel to the conference from the College of Engineering Engineer Your Experience fund allowed significantly more CBE student chapter members to attend than most other schools’ chapters were able to muster.

Finally, the chapter earned a 2020-2021 AIChE Outstanding Student Chapter Award. This is the chapter’s 26th Outstanding Student Chapter Award, the 23rd award in the past 25 years and the 11th year in a row they have received the award. Dr. Deborah Grubbe (2021 AIChE President) and CBE faculty member Dr. Christine Grant (2022 AIChE President) were there to present the award.

Most of the content for this article was provided by Dr. Kim Roberts, the chapter advisor. Adam Helsel is the Chapter’s Industry Liaison.

Congratulations to student chapter members for your collective efforts and to all the meeting attendees!