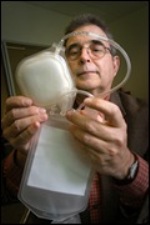 Dr. Ruben G. Carbonell has been named a Fellow of the National Academy of Inventors (NAI). NAI Fellows are named inventors on U.S. patents who are selected by their peers for outstanding contributions to innovation in areas such as patents and licensing, innovative discovery and technology, significant impact on society, and support and enhancement of innovation.

Carbonell has more than 30 patents and is the co-founder of Pathogen Removal and Diagnostic Technologies (PRDT), Inc. PRDT was founded to commercialize his peptide affinity ligand resins that can remove the infectious prion protein (responsible for Mad Cow Disease) from blood and blood products. Resins with these prion-capture-ligands have been adopted by Octapharma AG for their antibody production process. The new prion-safe product has been approved in 11 different countries, including the U.S.

Dr. Carbonell is the Frank Hawkins Kenan Distinguished Professor of Chemical Engineering. He’s a member of the National Academy of Engineering, a fellow of the American Institute of Chemical Engineers, and the Industrial and Engineering Chemistry Division of the American Chemical Society. His numerous awards at NC State include the Alexander Quarles Holladay Medal for Excellence, the highest award given to university faculty.

He currently serves as the Director of both the William R. Kenan Jr. Institute for Engineering and the Golden LEAF Biomanufacturing Training and Education Center (BTEC). He’s also a co-founder of two other start-up companies: Oryx Bio, and Green Clean, LLC.

The NAI is a non-profit member organization comprising U.S. and international universities, and governmental and non-profit research institutes, with over 3,000 individual inventor members and Fellows spanning more than 240 institutions. It was founded in 2010 “to recognize and encourage inventors with patents issued from the U.S. Patent and Trademark Office, enhance the visibility of academic technology and innovation, encourage the disclosure of intellectual property, educate and mentor innovative students, and translate the inventions of its members to benefit society.”