Colloidal silica gels have tremendous potential as novel composite polymer electrolytes because of their mechanical stability, processability and high conductivity. Our effort focuses on determining shear-induced microstructural changes in flocculated fumed silica gels, and relating them to fractal dimensions. We also obtain scaling relationships (analogous to the Cox-Merz rule) between steady and dynamic shear for non-flocculated systems, and correlate colloidal interactions with rheology.

UV cross-linked polymers are increasingly being considered for a wide range of applications because of their environmentally-benign, solvent-free nature and their rapid (on-line) curing speed. We have developed new techniques to continuously monitor the cross-linking behavior of UV curable systems in situ in the rheometer and using FTIR spectroscopy. This enables us to correlate rheology with extent of reaction, and investigate the effects of temperature and monomer functionality on gel point, fractal dimension, reaction order, gelation mechanism, and kinetics of model polymers.

CO2-induced plasticization of polymers offers a novel route to enhance polymerization and processability and develop new systems. First, polymer swelling in the presence of high-pressure CO2 is being examined. Kinetic swelling experiments can be manipulated to provide information about CO2 solubility, diffusion coefficients, and free-volume expansion. Secondly, a high-pressure rheometer is being designed to measure viscosity of polymeric melts with dissolved high-pressure CO2. The ultimate objective is to correlate the swelling and rheological behavior of polymer melts in order to obtain a comprehensive understanding of CO2-induced plasticization in polymer melts.

Hydrophobically modified associative polymers (HASE) and polymer/surfactant complexes are of significant interest because of their potential use in many applications (e.g., coatings, flocculants for waste-water treatment). These materials exhibit a multitude of unusual phenomena with respect to physically entangled systems (sol-gel transition, shear thickening followed by extreme shear thinning, strain hardening), the underlying mechanisms of which remain poorly understood. Using rheology together with microscopy, we are probing the network topology and mode of chain coupling in these systems under different types of deformation, as well as the phase behavior and interaction mechanisms for surfactant/polymer interactions.

Enzymatic modification of water-soluble polymers, such as guar galactomannans, offer a novel and powerful way to develop polymers with tailored architecture and properties. These polymers can be used in application ranging from food additives to oil/gas production. We are studying the kinetics and mechanism of enzymatic hydrolysis using rheology, size exclusion chromatography and mathematical modeling. Of particular interest is the correlation between molecular changes and macroscopic properties as a function of temperature, enzyme concentration and type (side chain vs. main backbone cleavage). We are also interested in developing and characterizing novel blends of enzymatically modified guar with other polysaccharides.

The Biax Spunblown® process is a unique variant of the meltblowing process. Molten polymer is extruded from an array of outlets each of which is individually surrounded by a concentric high velocity air stream. The Spunblown® process purportedly accommodates a wide range of polymer resins, produces fibers of similar size to meltblown, and uses reduced air volume as compared to traditional meltblowing. However, despite the aerodynamic differences from traditional meltblowing, the Spunblown® web formation process has been the study of little published research. 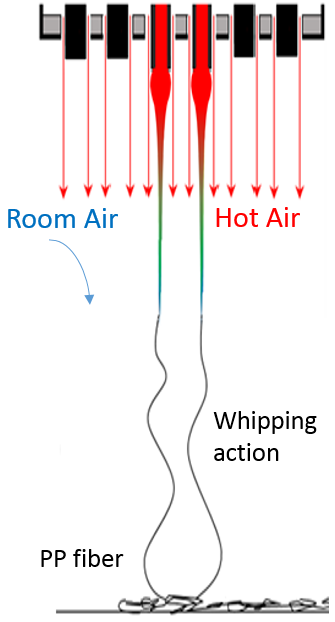 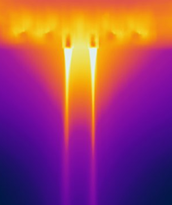 Infrared thermography has been used to determine fiber temperature during the spinning process and may be used to estimate fiber attenuation and determine appropriate die-to-collector distance. Results from IR image analysis indicate substantial heat transfer occurs between the air and molten polymer prior to spinning. Additionally, IR thermography demonstrates that larger fibers cool more slowly than more narrow fibers. A detailed three dimensional air temperature and velocity profile has been established for an array of supplied temperatures and air cavity pressures. Air heat dissipates more quickly than does air momentum, which is especially true very close to the spinnerets. The effect air temperature, polymer temperature, air speed, and polymer throughput have been related to fiber diameter distribution and distance to solidification. Fiber diameter distributions have been investigated as a function of an array of processing conditions and spinning stabilities. Decreases in polymer throughput most significantly reduced fiber diameters, but higher air temperature also lowered diameters substantially, and higher air pressures to a lesser extent. Spinning instability may significantly contribute to fiber size reduction through turbulent whipping action.

In recent years, zirconium hydroxide has become a material of interest for chemical warfare agent protection because of its reactivity towards a range of acid gases. Unfortunately, zirconium hydroxide is typically manufactured in powder form, which limits its applications. The goal of this project is to deposit zirconium hydroxide coatings on fiber surfaces to create protective textiles. To achieve this, we are exploring a range of deposition processes from gas-phase molecular layer deposition (MLD) to liquid phase layer-by-layer techniques, such as successive ionic layer adsorption and reaction.

The creation of superhydrophobic and superoleophobic surfaces is a technical challenge that is applicable to many different industries, including automotive, consumer electronics, adhesion and many others. In particular, oil repellent nonwoven materials have been designed for the protection of charged electret filters from loss of charge, however alcohol exposure of these products still pose a significant issue. Due to their extremely low surface tension compared to water and many oils, the creation of a surface which induces a significantly increased contact angle with alcohol is extremely challenging. This project explores the use of fluorochemical melt additives to generate nonwoven substrates with increased oil and alcohol repellency. These surfactant-like additive molecules are dispersed evenly throughout the fiber at the time of manufacturing, but due to their low surface energy, gradually segregate to the fiber surface over time. In this work, X-ray Photoelectron Spectroscopy (XPS) is being used to characterize the kinetics of the changing surface composition of the nonwoven fibers,throughout the migration process. This changing composition is then related to repellency via contact angle data. It has been shown that changing surface composition due to migration results in increased repellency. Samples with sufficient surface concentration of additive prevent wetting by isopropyl alcohol (IPA) and are therefore able to survive IPA vapor discharging tests in order to maintain filtration efficiency performance.

Polyester polyols are polymers with multiple ester linkages terminated by hydroxyl groups. The diversity of these polymers stems from the numerous possibilities of specific diacids, diols, and multifunctional monomers as well as a range of possible molecular weights. These cross-linked polymeric films are used extensively as protective coatings for both metallic and non-metallic substrates. Such coatings are often applied as liquids and are then cured to give a solid, densely cross-linked film. In developing the next generation of coatings, a fundamental understanding of the curing process and the resulting film properties is needed. 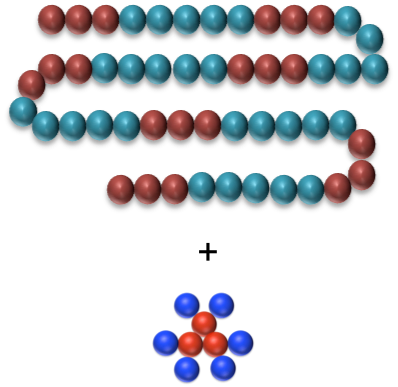 The in-situ cure behavior of these coatings can be studied chemically using spectroscopic techniques, and it can be characterized in terms of mechanical property evolution using dynamic rheology. Final film mechanical properties can be characterized using an array of techniques, from dynamic mechanical analysis (bulk film) to nanoindentation (surface properties). The ultimate goal of the research is to correlate final film properties with cure behavior and understand how different parameters, specifically polymer and cross-linker chemistry, affect coating performance.

Researcher: Amulya Pervaje
Molecular modeling of this system has started from a top-down coarse-graining approach, using thermodynamic information on the monomers to build the polymer models. Experiments are characterizing the kinetics and rheology during crosslinking as well as mechanical properties of crosslinked films. With this information and by building computational models that have been experimentally validated, we correlate and predict material properties based on underlying chemistries. 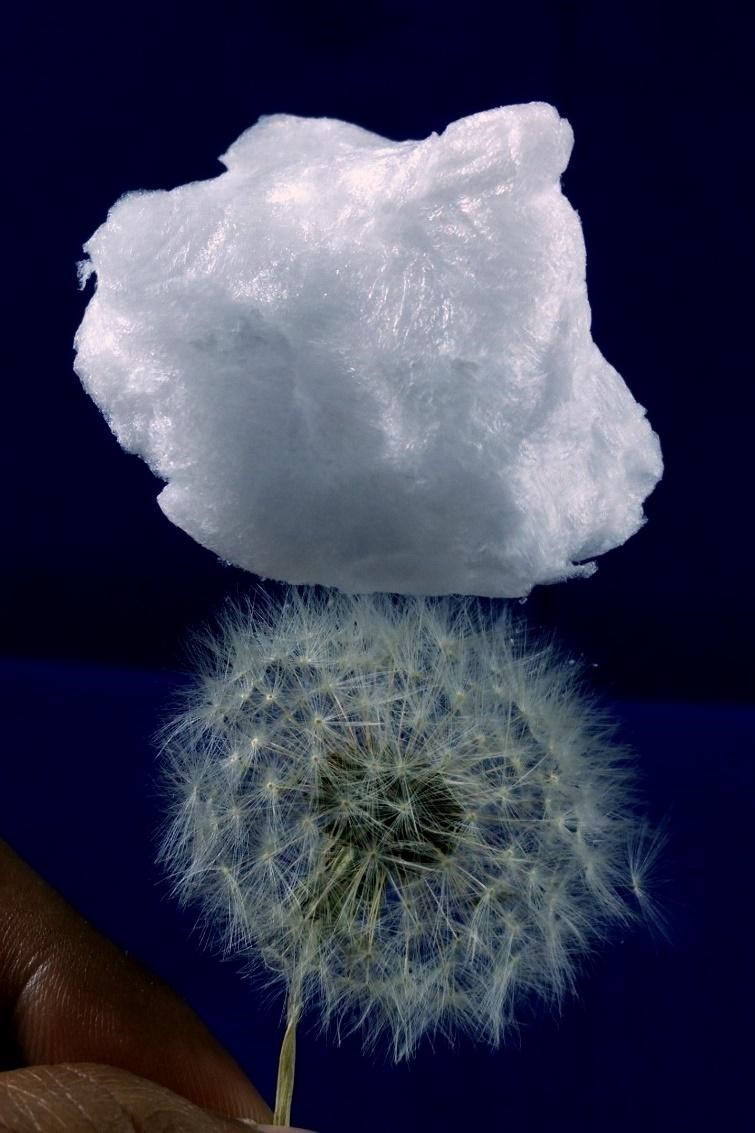 Recently, we have ventured in the area of developing light-weight and robust materials from cellulose and its derivatives for environmental remediation. Through a unique combination of well-established synthesis procedures involving chemical cross-linking, careful solvent exchange to water and subsequent freeze drying, we have produced ultra-light (4.3 mg/ml) and highly porous (99.7 %) cellulose diacetate aerogels (CDA) with honeycomb morphology. These aerogels demonstrate a maximum water and oil uptake of up to 92 and 112 g/g respectively.  The honeycomb morphology provides a maximum compression strain of 92 % without failure and reach a  compressive stress of 350 kPa, for 4 w/v% CDA aerogels (4%), which is higher than that reported for cellulosic aerogels. The 4% CDA aerogel were rendered hydrophobic and oleophilic via chemical vapor deposition with an organo-silane. The modified CDA aerogel surpass their counterparts in maintaining their mechanical integrity for fast oil cleanup and efficient oil retention from aqueous media under marine conditions. These aerogels are identified as reusable and durable for a long period.

The goals of this project are to create a water-based coating that would (1) allow for composition manipulation to tailor the coating for achieving superhydrophobicity; (2) enable adhesion to a variety of substrates while maintaining the original hand; and (3) provide a durable coating that has the ability to withstand abrasion, laundering, and excessive wear. By exploiting the properties of both polyurethanes and polysiloxanes, a block co-polymer can be synthesized to achieve strong adhesion to a variety of substrates while imparting hydrophobicity and flexibility through polydimethylsiloxane segments, and water-solubility through carboxyl containing segments. The rationale behind examining such a coating formulation stems from a need to develop and understand an aqueous-based, fluorine-free liquid-repellent coating in an attempt to shift towards more environmentally friendly technologies. 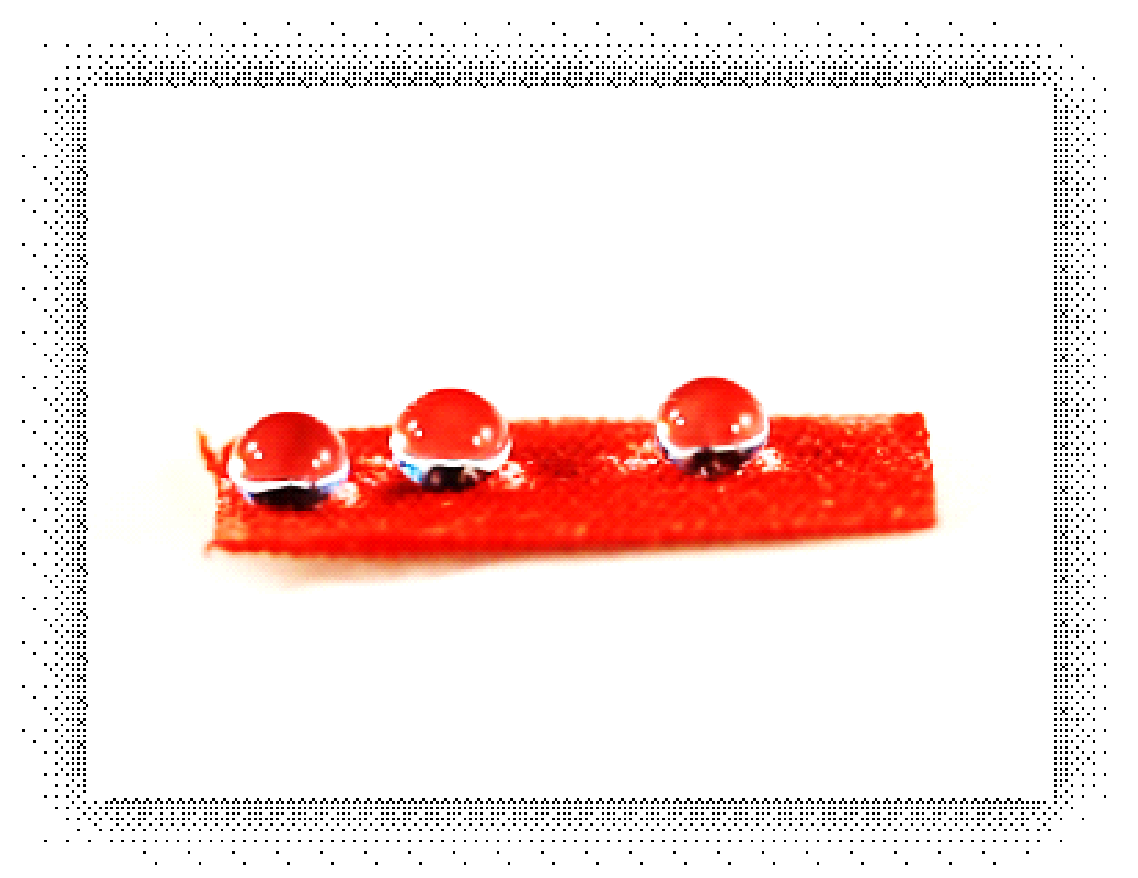 Uterine fibroids are benign tumors composed of altered and disordered collagens which occur in 70-80% of women before age 50. Reducing the stiffness of these tumors can reduce pain and eliminate the need for surgical removal. In malignant breast cancer tumors, which women in the U.S. have a 12% lifetime risk of developing, reducing the tissue stiffness can slow tumor progression.

In collaboration with scientists at NC Central University, Duke University, and NC State’s veterinary school, we are developing treatments for each disease by combining collagenase enzymes with an injectable and biodegradable polymer matrix, which slows the diffusion of collagenase out of the tumor mass. We are performing in-vivo studies on human uterine fibroid tissue implanted in mice and xenograft human breast tumors.

Rheology is a powerful and quantitative technique used to measure a material’s strength and viscoelastic properties, though it is not commonly used on biological samples. By comparing the average stiffness and elasticity of the tissues in each treatment group and as a function of time, we can quantify treatment effectiveness.

Oil-in-water (O/W) emulsions with polymers are amongst the most popular in the personal care industry due to their high water content, which leads to their less greasy feel and lower cost. Since they are thermodynamically unstable, surfactants are used to reduce the interfacial tension between the oil droplet and the aqueous continuous phase. Traditional surfactants used in personal care products can accumulate in the skin and cause a washout effect in the next cleansing, removing the skin’s own lipids, thus there is interest in the use of a class of phospholipids, hydrogenated phosphatidylcholine (HPC), as emulsifiers. This type of phospholipids can form a lamellar membrane similar to the one encountered in the human stratum corneum, which is physiologically compatible and does not irritate sensitive skin. 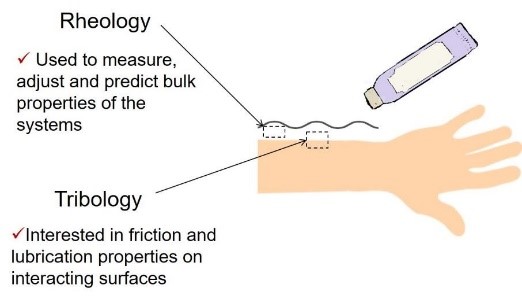 Consumer acceptance of a product is not only dependent on its efficiency, but is directly related with its sensory perception. Thus, consumer product industries focus on the rheological characteristics of these types of O/W emulsions, as they provide information about flow behavior from manufacturing to final use, in addition to textural properties, such as spreadability or penetration. However, bulk rheometry cannot be a stand-alone characterization technique for cosmetic products. During use, when a moisturizer forms thin lubrication films, the shear-dependent dynamic response of these thin films influences friction forces which relates to the ‘feel’ of a product. Thus, there is a need to use rheological and macroscopic tribological measurements to help predict sensory perception of O/W emulsions with polymers.

In this project, we expect to gain a deeper understanding of tribological behavior of non-Newtonian systems in soft contacts. The ultimate system that is of interest to us includes a hydrophobically modified polymer, a phospholipid, and an oil phase, forming an O/W emulsion. By finding relationships between rheological and tribological properties, we aim to help predicting sensory perception of emulsions for skincare applications.