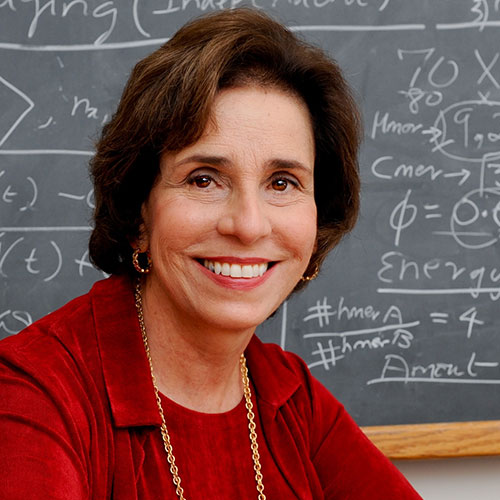 The common theme running through our research is the principle that macroscopic-scale properties are a reflection of molecular behavior.

Carol Hall’s research is driven by her fascination with molecules of interesting architectures and energetics, and by her desire to understand how these molecular features combine to yield complex mesoscopic or macroscopic features. Her primary tools in this effort are statistical thermodynamics, which allows estimation of thermophysical properties from knowledge of intermolecular forces, and computer simulation, which permits the visualization of systems on a molecular level. These techniques are used to model the self-assembly of soft materials including colloids, gels, lipids, and surfactants, and proteins whose aggregation is implicated in Alzheimer’s and other neurodegenerative diseases. A new research area is the design of short peptides to bind to specific biomolecular targets including RNA and proteins. Hall’s research is informed and enriched by interactions with experimental colleagues at NC State, and across the world.

Soft Materials
Soft materials, such as polymers, colloids, surfactants, DNA, and gels are of interest because they spontaneously self-organize into mesoscopic physical structures that can be exploited for nanotechnology or biomedical applications. In the colloids area, she and colleague Orlin Velev are exploring the self-assembly, crystallization and/or gelation of systems of colloid particles with embedded dipoles so as to guide the discovery of advanced materials in the Velev laboratory. Hall has developed a coarse grained model of chitosan, a polysaccharide derived from the shells of crustaceans and is using it to simulate the formation of hydrogels for use in oil spill remediation and drug delivery. With collaborator Tania Betancourt (Texas State University), Hall is using coarse-grained simulations to optimize the design of aptamer-enabled molecularly-responsive hydrogels. A recent focus is the use of simulations to learn the composition of the corona of proteins formed around nanoparticles in the body, a project expected to help us understand nanoparticle toxicity.

Protein Aggregation
Protein aggregation is a cause or associated symptom of a number of neurodegenerative diseases, including Alzheimer’s, Parkinson’s and the prion diseases. Hall and her students are using computer simulation to investigate the formation of ordered protein aggregates, called fibrils, which are invariably found in the brains of victims of these diseases. A coarse-grained protein model, PRIME20, has been developed that enables the simulation of specific amyloidogenic peptides when used with discontinuous molecular dynamics (DMD), a fast alternative to traditional molecular dynamics. Hall was among the first to tackle the protein aggregation of a large system of proteins starting from a random configuration of monomers and culminating in fibrillar structures. As part of collaboration with experimental biophysicist, Sheena Radford, and chemist, Andrew Wilson, at Leeds University, she is simulating the early oligomerization and fibrillation of beta amyloid, the Alzheimer’s peptide, and evaluating the impact of selected aggregation inhibitors. Finally, she and collaborators Anant Paravastu (Georgia Tech) and Gregory Hudalla (University of Florida) are investigating the co-assembly of peptides used as recombinant protein fusion tags for integrating enzymes into supramolecular hydrogels.

Protein Design
Short peptides that bind to specific biomolecules have many uses, including as biosensors, diagnostics, therapeutics, and affinity ligands for bioseparations. The Hall group has been developing a computational search algorithm to design peptide sequences that can bind to specific RNA- or protein-based targets. The method has been applied to design a 15-amino-acid peptide to recognize human lysine tRNA species (tRNALys3), a primer for HIV reverse transcription, with the goal of potentially interfering with the reverse transcription of HIV. Synthesis and experimental characterization by collaborator Paul Agris at Albany University showed that the top scoring peptides have a binding affinity that is 10-fold better than that of the best phage-displayed-identified peptide. In a project with researchers at the Air Force Research Laboratory, peptides were designed to produce high-sensitivity detectors for cardiac troponin I (cTnl), a biomarker of cardiovascular disease. A 12-mer peptide was identified that has an experimental cTnl binding affinity that is much better than that of the best phage-display identified peptide and almost as good as that of the natural cTnl antibody.