Professors Orlin Velev and Michael Dickey, alum Dr. Timothy Shay (Ph.D. ’17) and Ph.D. candidate Tamoghna Saha, have developed a paper-based device that serves as a model of wearables that can collect, transport, and analyze sweat in next-generation wearables technology. 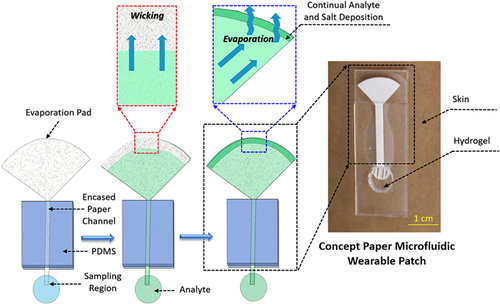 Human sweat contains several biomolecules the research community is exploring for noninvasive medical testing. Sweat can also be used to evaluate concentrations of various medications and biomarkers in the blood, and paper microfluidic devices collecting and analyzing sweat could be used to assess the course of certain diseases or how well patients adhere to drug regimens.

Akin to water transport in plants, the device uses capillary action and evaporation to wick fluid that mimics human sweat to a sensor for up to 10 days or longer. The goal is to use the properties of paper to point a way forward for affordable, longer-term wearable devices with analytic capabilities.

One central problem for any device in analyzing sweat is that it contains salts, which, upon evaporation, will deposit on the device and interfere with fluid flow. The team’s device densely packs deposited salt crystals, allowing for longer use and a way to study the timing of when certain chemicals have been present in the sweat.

“We expected that the flow of the model sweat will be suppressed by the deposition of a salt layer inside the drying pad,” Velev said. “By following the flow of model sweat, we found, quite surprisingly, that such a simple paper construct can achieve continuous sweat pumping and disposal for very long periods.” A brief video of the wicking flow can be viewed here.

“The biological markers or drug metabolites that seep in the patient’s sweat over a long period will be captured on the paper pad and preserved in a time-stamped manner to be analyzed later, similar to tree rings preserving the record of tree development,” Dickey said.

Driven by the liquid wicking through paper, the device doesn’t require external power. Its low cost also poses uses for inexpensive medical testing in under-resourced patient populations who struggle to have access to such testing. Such skin patch assays could remove the need to take blood samples.

The team has started a series of human trials to explore how the technology provides longer-term biomarker analysis, and they plan to resume the trials when pandemic safety measures make it feasible to proceed.

A paper describing the research results, “Principles of long-term fluids handling in paper-based wearables with capillary–evaporative transport,” is published in the journal Biomicrofluidics, from AIP Publishing.

The team’s work was funded in part by the NSF Center for Advanced Self-Powered Systems of Integrated Sensors and Technologies (ASSIST) at NC State. The team is continuing the work on wearable devices for health monitoring and was recently joined by the graduate student Sneha Mukherjee, who is developing assays for potential applications by the US Air Force.