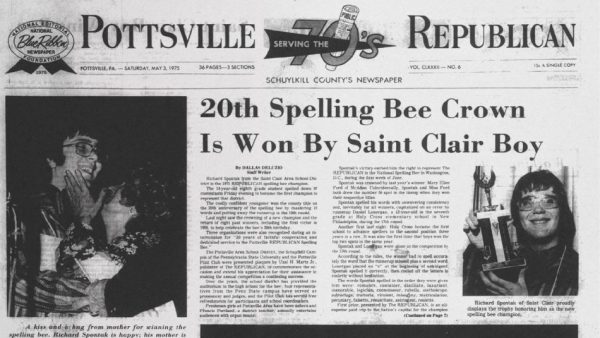 Today, Dr. Richard Spontak is a Distinguished Professor of Chemical and Biomolecular Engineering at NC State. Internationally known for his award-winning research in the field of soft materials, he focuses on developing and modifying recyclable elastomers — soft stretchy polymers — for a variety of applications, from infection prevention to wearable technologies and robotics.

But 45 years ago, long before he mastered the fundamentals of polymer science and the use of an electron microscope, Spontak was just a smart kid growing up in a small working-class borough in Schuylkill County, Penn., where athletics reigned supreme.

And then he found himself in the throes of competition, in a spelling bee.

Though it sounds mundane, it turned out to be a pivotal moment in his young life.

He’d won his school spelldown and had advanced to the regional competition, which even to this day conjures up vivid memories.

“When I close my eyes, I can still picture the crowd in the auditorium and recall how my legs got tense and my palms became sweaty. I was competing against a fellow student from a local Catholic school, which was my public school’s biggest athletic competitor. I remember my opponent missing his word and feeling confident that I knew how to spell it. When I did and correctly spelled the next word (‘roulette’), I simply could not comprehend that I had won. I showed the students, faculty and administrators that students in my tiny public school could compete in scholarship, as well as on the court and field.”

With that victory, Spontak — then a 14-year-old eighth grader from Saint Clair, Penn. — was one of 79 students from around the country to earn their way to Washington, D.C., for a seat in the 48th National Spelling Bee in 1975. It was two days of oral spelling sandwiched into a week of sightseeing and parties for the youngsters and their families. (By comparison, the 2020 National Spelling Bee, which was to be held May 24-29, 2020, but has been postponed, would have drawn about 400 competitors. After a written competition whittles the field down, the finalists would go head-to-head in a spelldown broadcast live on ESPN).

Spontak lasted about halfway through the national bee, tripping on the word “replevin,” which is a legal action allowing the recovery of personal property. He spelled it r-i-p-l-e-v-i-n.

“It’s burned into my memory forever,” he said.

The National Spelling Bee experience made Spontak realize that being smart was not a bad thing. He was treated differently when he returned home. He’d found his niche.

“In my school district, the only way to gain notoriety was through athletics. That was not my strength at the time, but I was a straight-A student from the fifth grade on. I spent hours each day preparing for D.C. I recorded every word in the spelling bee booklet and quizzed myself incessantly. I honestly felt like an athlete working out every day.

“I demonstrated to an athletes-only community that scholarship could be equally competitive, important and visible. Despite my current status and my achievements along the way, folks in my hometown still remember me as the spelling bee champion.”

After competing in the National Spelling Bee, Spontak began entering — and winning — other types of scholarly contests. He became editor of his award-winning high school newspaper. He was named valedictorian of his high school class.

“To be honest, I hungered for scholarly competition throughout college and that ultimately drove me into undergraduate research, which was very rare in those days.”

Spontak spent two years as a research scientist with Procter & Gamble Co. before joining the faculty at NC State in 1992.

Lessons he learned from the National Spelling Bee have stayed with him.

“I’ve been blessed with many very talented students in my research activities. My group has been very prolific and I believe that we have made beneficial contributions to science and technology. I cherish the opportunities to conduct cutting-edge research in the field of soft materials and to assist students involved in research or engaged in classes prepare to become tomorrow’s leaders.

“In hindsight, it’s rather funny to realize that my career success may be, in part, due to a spelling bee. It really was a life-changing experience for me.”

— Freelance writer Amy Blakely recently retired from the News and Information Office at the University of Tennessee, Knoxville. She, too, was a participant in the 1975 National Spelling Bee and has embarked on a project to reconnect with other contestants from that year.